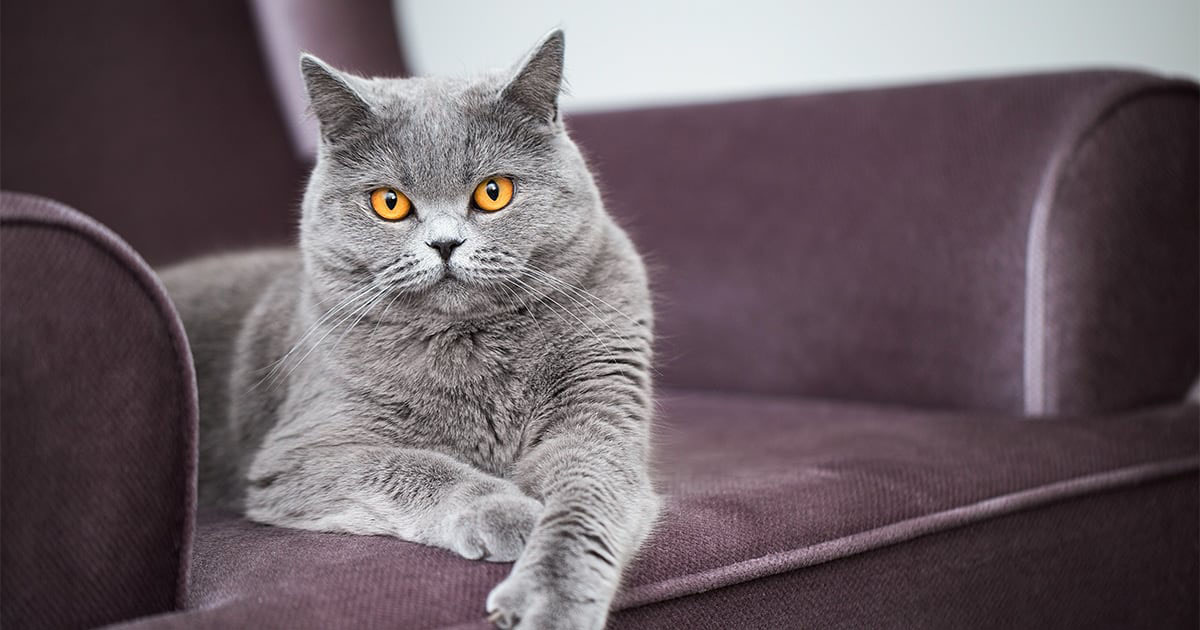 The idea that someone can be overweight but still healthy has been debated in human health and fitness circles for years. And with the increased humanization of pet cats and dogs, that human-health debate has prompted some pet parents to question whether their cats can be overweight yet still be healthy.

The easy answer — the one based on the results of many studies — is yes, overweight and obese cats are at risk for health problems. Other research suggests some extra weight may not be such a bad thing, especially as cats enter their senior years. And as with people, several variables in addition to weight and body condition contribute to an individual’s health risks.

When is a cat considered overweight?

Different cat breeds have slightly different weight ranges but, as a general rule of thumb, most cats should weigh about 7 to 12 pounds. There are some exceptions, however. The American Curl and Devon Rex may weigh as little as 5 pounds, while the Maine Coon can weigh as much as 25 pounds and be at a healthy weight.

Since the ideal weight for a specific cat depends on the cat’s frame size, veterinarians tend to focus on body condition score (BCS) rather than weight only, according to the clinical nutrition service team at Cummings School of Veterinary Medicine at Tufts University. Body condition scoring helps veterinarians estimate how much body fat a cat has by evaluating the amount of fat over the rib cage.

Your veterinarian may use a 5-point scale or a 9-point scale, where 1 is very thin/emaciated and 5 or 9 is obese or grossly obese, respectively. Either scale is acceptable, although the 9-point scale allows veterinarians to better assess subtle changes in your pet’s condition and weight.

A number of definitions for pet obesity have been used. However, the authors of the 2014 AAHA (American Animal Hospital Association) Weight Management Guidelines for Dogs and Cats defined obese as a BCS score of 8 or greater on the 9-point scale. In 2018, the American Veterinary Medical Association (AVMA) endorsed a definition that also defines obese as a weight that’s over 30 percent greater than the ideal weight. Thirty percent above ideal weight corresponds to a BCS of 8 on the 9-point scale (8/9) or 4.5 on the 5-point scale (4.5/5). Cats and dogs are considered overweight when their weight is more than 10 to 20 percent above their ideal weight and their corresponding BCS is either 6/9 or 7/9 (3.5/5 or 4/5).

Why does it matter if your cat is overweight?

And those are just the health issues you might see.

What you can’t see are the changes in hormones and chemical signals, collectively known as adipokines, that affect metabolism, inflammation, blood glucose (sugar) balance and insulin sensitivity. You can read more about two key hormones, leptin and adiponectin, produced by adipose (fat) tissue here. In people, obesity is now considered a chronic inflammatory disease, and many veterinary experts believe the same holds true for cats and dogs.

Finally, based on the findings from a survey of veterinary clinics in the northeastern United States, many veterinarians believe that being moderately overweight — not just obese — reduces a cat’s life span. In the study, obese cats that were 8 to 12 years old had a 2.8-fold increase in mortality compared to lean cats.

A more recent study, however, looked at the relationships between BCS, survival time and life span in cats, and came up with some surprising findings.

Researchers at the University of Sydney in Australia used the medical records of adult feline patients seen at least twice by a predominantly feline practice over a 10-year period. Patient information included the cats’ breed, gender, reproductive status (whether neutered or not), age, lifestyle and health conditions. The date of each cat’s maximum BCS (maxBCS) was also noted.

Most of the practice’s feline patients (85 percent) had a maxBCS of 5, 6 or 7 on a 9-point scale, with cats reaching their maxBCS at a median age of 5.4 years.

The median life span for all cats in the survey was 15.8 years. Those cats with BCS scores ranging from 6/9 to 8/9 had longer life spans that cats with lower BCS. Although obesity was associated with certain chronic health conditions, the study found it didn’t impact average life span. The study also found that lean cats with BCS scores of 3/9, 4/9 or 5/9 had a relatively greater risk of shortened survival, possibly related to health issues associated with weight loss.

What does this all mean?

For starters, more research into cats’ life span, body condition, weight and health conditions would be valuable. However, most research has shown a consistent association between extra body condition (and weight) and chronic health conditions in cats that may result in a shortened life span. Given how difficult it can be to help a cat lose weight, feeding your cat to maintain ideal BCS and optimal weight should still be the goal. But if your cat is very slightly overweight — maybe he or she has a BCS of 6/9 instead of 5/9 — the extra weight may not be a problem since there are other variables (e.g., genetics) at play.