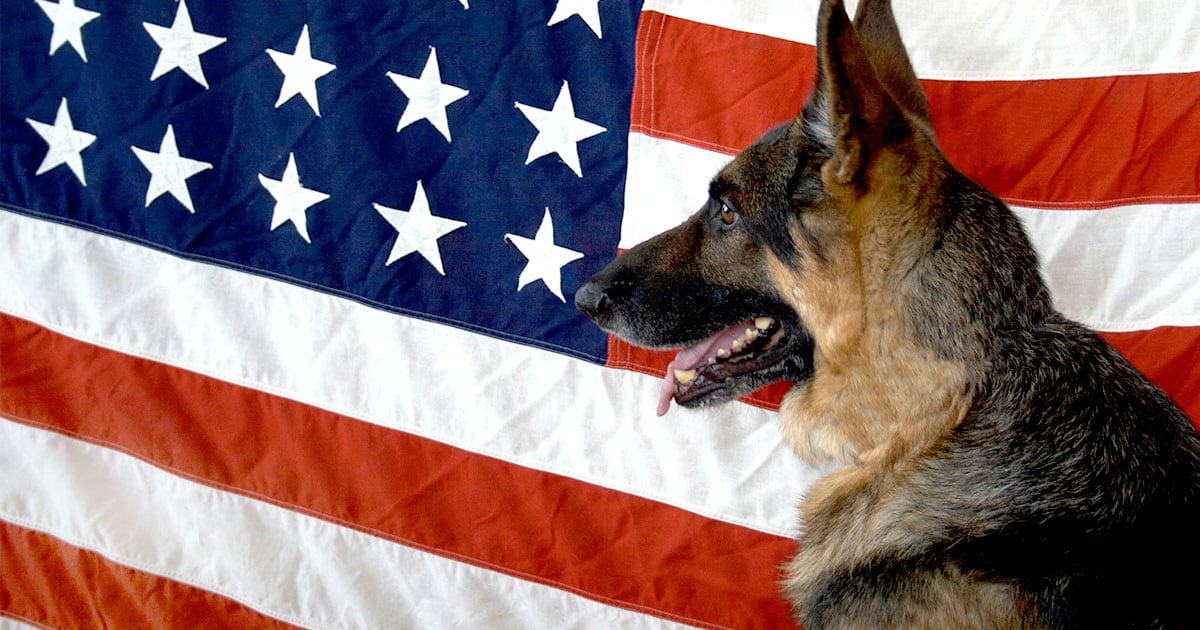 From Holmdel, New Jersey, to Riverside, California, to Apra Harbor, Guam — plus many more places in between — you can find memorials dedicated to heroic canine warriors. Some of these inspirational monuments honor the service and sacrifice of “war dogs” during specific wars. Others celebrate the bond between military working dogs and their handlers.

In recognition of National K9 Veterans Day (March 13), we pay tribute to these valiant soldiers by highlighting some of the more well-known dog memorials and the stories behind them.

One of the oldest monument tributes to a soldier’s best friend can be found at Gettysburg National Military Park, located on the site of a crucial Civil War battle. Sallie, a Staffordshire bull terrier, was given to the 11th Pennsylvania Volunteer Infantry as a 4-week-old puppy. She became the unit’s mascot and took part in the battles they fought by barking furiously at the enemy.

When separated from her regiment at Gettysburg during a retreat, Sallie stood watch over dead and dying soldiers until she was found by soldiers from her regiment who returned to the battlefield three days later. Sallie was killed during the battle of Hatcher’s Run in 1865.

About 20 miles north of Manhattan sits Hartsdale Pet Cemetery and Crematory, the first and oldest pet cemetery in the United States. The hillside pet cemetery is also home to the War Dog Memorial, a monument built to honor the 7,000 military dogs who had served in the Great War (World War I). The monument consists of a 10-foot-high, 10-ton granite boulder on which stands a bronze statue of a German shepherd wearing a Red Cross blanket. A bronze canteen and dented helmet lie at the dog’s front feet.

The War Dog Memorial was installed in 1923, and its unveiling was attended by representatives of every nation that fought in World War I.

The U.S. military has enlisted the help of working dogs since the Revolutionary War. However, it wasn’t until World War II (WWII) that the number of dogs used to support military operations surged and the official U.S. Army War Dog Program, or K9 Corps, was started.

During WWII, military working dogs served in the U.S. Marine Corps (USMC) and Army as scouts, guards, sentries and messengers. Particularly in the Pacific war theater, these special dog and handler teams scouted trails and caves, sniffed out enemies and mines, carried messages and medical supplies, rescued wounded troops and guarded camps. The Marines adopted the Doberman pinscher as their canine companion of choice, and soon the USMC’s 2nd and 3rd War Dog Platoons became known as the Devil Dogs.

Twenty-five Marine war dogs gave their lives to liberate Guam, a U.S. territory, from Japanese occupation during the 1944 Battle of Guam. One Devil Dog in particular stands out: Kurt, a Doberman pinscher, who’s considered the first military working dog killed in action during the battle to reclaim Guam. Kurt’s sacrifice helped save the lives of 250 soldiers that fateful day when he alerted the Marines to the presence of Japanese soldiers.

Today, Kurt’s likeness is immortalized as a life-size bronze sculpture on top of a black granite monument. The official memorial, located at Naval Base Guam, is inscribed with the names of all 25 Devil Dogs who died there.

Known as “Always Faithful,” castings of the memorial also can be found at the University of Tennessee’s College of Veterinary Medicine in Knoxville, Tennessee; the Alfred M. Gray Marine Corps Research Center in Quantico, Virginia; the Centennial Garden at Auburn University’s College of Veterinary Medicine in Auburn, Alabama; Semper Fidelis Memorial Park, part of the Marine Corps Heritage Center in Triangle, Virginia; the American Kennel Club (AKC) Museum of the Dog in New York City and in private collections.

The first national monument dedicated to U.S. military working dog teams can be found as part of the Air Force basic military training parade grounds at Joint Base San Antonio (JBSA)-Lackland, in San Antonio, Texas. JBSA-Lackland is home to the Department of Defense (DoD) Military Working Dog program since 1958, along with the DoD Military Working Dog Veterinary Service and the Holland Working Dog Hospital.

The main granite base also features a 9-foot-tall bronze statue of a military K9 handler to represent all U.S. military dog handlers who served in WWII, the Korean War, the Vietnam War, the Gulf War and the War on Terror, according to a JBSA-Lackland press release. The monument also includes a large granite wall and five flagpoles, one for each branch of the U.S. Armed Services and the U.S. Coast Guard.

In addition, a working water fountain — the “Not Forgotten Fountain” — is part of the memorial. The water fountain is a bronze sculpture of a Vietnam War dog handler pouring water from a canteen into his helmet for his canine partner.

On the grounds of the Airborne and Special Operations Museum in Fayetteville, North Carolina, you’ll find the SOF (Special Operation Forces) K9 Memorial. The bronze monument is a life-size Belgian Malinois wearing his full deployment kit. The statue is surrounded by granite pavers engraved with the names, country of origin, and place and year of death of SOF dogs killed in combat while serving with the United States, United Kingdom and Australian Special Operation Forces.

SOF dogs, or “super dogs,” are multi-purpose canines rather than military working dogs. They’re trained to parachute out of planes and float to the ground with their partner, and to track and seize the enemy under the most difficult conditions. Conan, the military dog that assisted Special Forces soldiers in the raid that killed ISIS leader Abu Bakr al-Baghdadi, is one such super dog who has participated in about 50 missions.

More noteworthy memorials to military dogs and their handlers

Here are four more memorials and monuments dedicated to the service of military working dogs and their human soldier-partners that are worth checking out.

The Vietnam Dog Handler Association website has a memorial locator that lists information about even more war dog memorials, and the Tour of Honor website includes a database of U.S. war dog and police K9 memorials, complete with GPS coordinates. Be sure to check out these listings!

RELATED POST: What You Need to Know About Giving a Retired Military Hero a Home