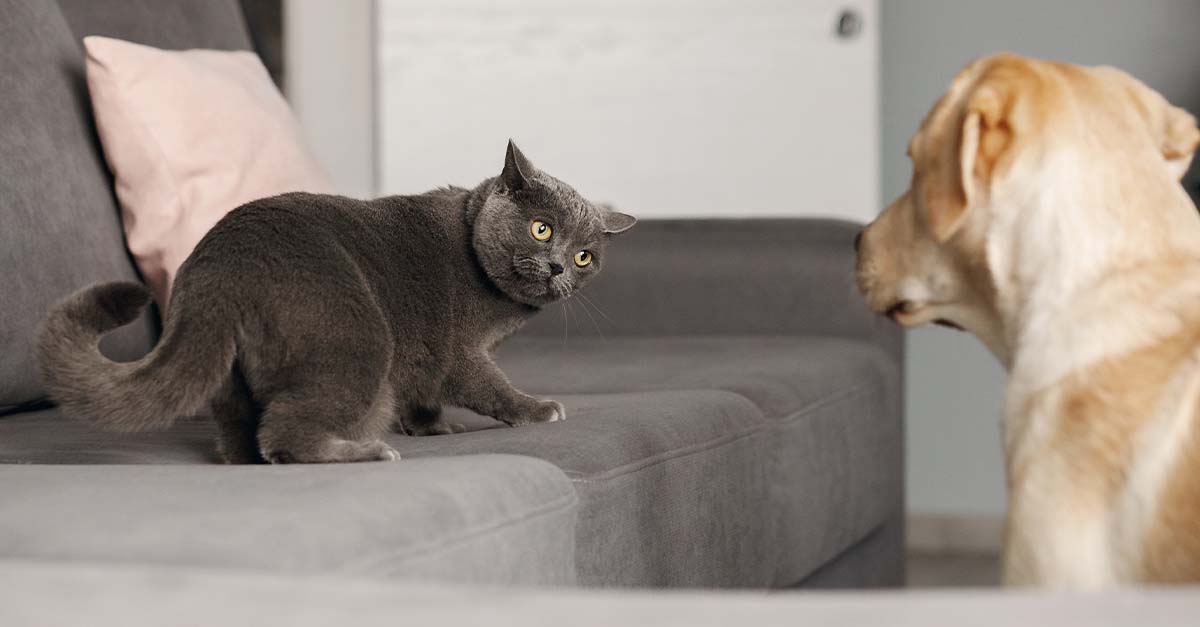 Hardwired behaviors can have a big influence on the relationship between cats and dogs. For example, dogs love to chase. Balls, leaves, squirrels, birds — basically, dogs will chase  anything that moves (including cats). And cats love to run. The flight option of the fight or flight response kicks in for most cats when they’re threatened, and that means run!

So it’s not surprising that a lot of dog and cat encounters start with a game of chase and end with a dog barking at a cat that’s escaped to a tall tree. Of course there’s the occasional brave kitty that will stand their ground and, with a quick swipe to the nose, have the dog running, but generally speaking, dogs chase cats. Which is really not a great start to a relationship.

Cat: I Need My Space

The social personalities of dogs and cats can also influence who they get along with, including members of their own species. Typically, dogs are social animals who love being part of a pack (including a human pack). Cats, on the other paw, are generally solitary animals that join the party when they want to.

So when you have a friendly, social dog that’s all, “Hello! I want to play. Can I lick you?” that isn’t going to go down well with most cats. But this doesn’t just apply to cat and dog relationships. There are plenty of cases where one cat is not happy that another cat has joined the family. Similarly, some dogs just don’t get along, particularly if there’s a large age difference. It all depends on the personalities of each dog and each cat.

The important words from our discussion so far are most, typically and generally. Because while most dogs love to chase cats and cats typically prefer to be alone, there are certainly a lot of exceptions to those rules that put holes in the “dogs and cats hate each other” myth. Particularly if the dog and cat have known each other since they were young.

It’s true, dogs and cats can be best friends. There are plenty of cute photos and videos of dogs and cats snuggling that prove this. From dogs who took on the role of a parent when a kitten was added to the family to others that took a little convincing that the new addition was acceptable, there are plenty of dog and cat friends out there. Or at least dogs and cats that tolerate (but don’t hate) each other…

Introducing Dogs and Cats for the First Time

If you have a dog and are considering adding a cat to the family (or vice versa), it’s important that the introduction is slow and safe. Cats need a safe place to retreat to and at least two escape routes to get to it. It’s also important to know each animal’s posture, facial expressions and other cues that signal stress, fear or aggression so that you can quickly intervene. Our post on introducing kittens to dogs has a great chart for reading your cat’s mood, and we have a similar a post for signs of stress in dogs, too.

The answer to whether dogs and cats do hate each other depends on their personalities and their life experiences. Introducing dogs and cats to each other in a safe and controlled setting can go a long way to help them develop a loving — or at the very least, amicable — relationship.