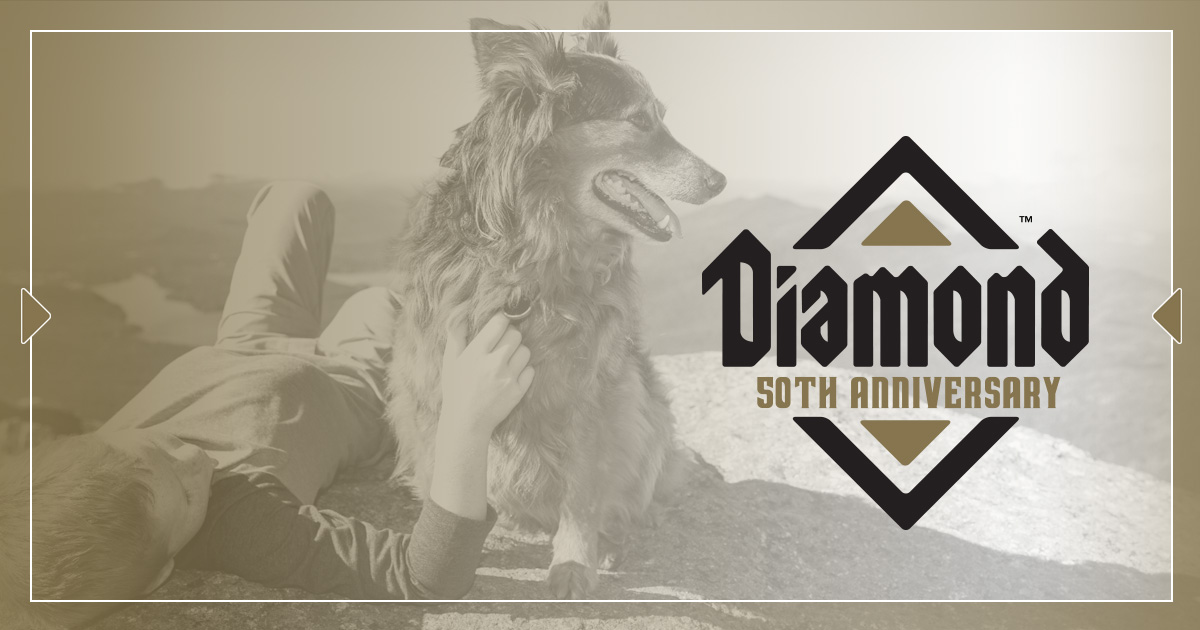 When Diamond Pet Foods was founded in 1970 as a family-owned business, our goal was to make nutritionally sound dog and cat foods that we’d be proud to serve our own pets as well as yours. Now, 50 years later, our passion for and commitment to making high-quality pet foods is as strong as when we started.

But many other things — pet ownership, the bonds between people and their pets, and dog and cat nutrition — have changed dramatically over the past five decades. Join us as we look back to see how much pets’ lives have changed for the better.

Pet ownership has doubled since Diamond Pet Foods was founded

Getting accurate data about pets and pet ownership in the United States isn’t easy. And in the 1970s, data collection on the topic was practically nonexistent. Today, the two main sources of pet demographics are the APPA National Pet Owners Survey, conducted by the American Pet Products Association (APPA) since 1988, and the U.S. Pet Ownership & Demographics Sourcebook, published by the American Veterinary Medical Association (AVMA) since the early 1980s. The information is based on estimates drawn from periodic surveys, and, while the numbers don’t always agree, they do provide trend information.

According to APPA data, 67 percent of U.S. households, or about 85 million homes, own a pet. This is up from 56 percent of U.S. households in 1988, the first year of the survey. In contrast, AVMA data for 2017-18, the most recent information available, found 56.8 percent of households have pets, or about 74.4 million homes, a rate that has remained stable since 2001. The AVMA data estimates the number of pet dogs and cats at 135.2 million.

The increased pet population has been accompanied by greater pet owner spending. According to the APPA, in 1994, Americans spent about $17 billion on their pets for food, medicines, supplies, veterinary care and other services. In 2019, pet owner spending reached $95.7 billion.

The human-animal bond has grown stronger

From working animal to companion pet, from roaming the streets to sleeping on their owners’ bedsheets, the lives of a majority of U.S. dogs and cats have greatly improved. The shift in how pet owners and even society related to pets, particularly dogs, began during the early 1970s. Back then, an estimated 25 percent of U.S. dogs were allowed to roam the streets. And in 1973, the HSUS estimated that around 20 percent of pet dogs and cats — approximately 13.5 million — were euthanized in animal shelters.

Today, there are very few “street” dogs and, in many areas, colonies of “community cats” are cared for by volunteers. Fewer dogs and cats are being surrendered to shelters and rescue groups, although the number of pets has increased. In addition, the euthanasia rates of dogs and cats in shelters have fallen to 8.1 percent and 13.6 percent, respectively.

Many factors have contributed to this shift in the relationship between pets and their owners. During the mid-1970s, the major national humane, veterinary and animal control organizations began working together on more sustainable and humane solutions to the perceived pet overpopulation issue. The result was an initiative that not only educated pet owners about responsible ownership, which included neutering and spaying pets, but enforced responsible pet ownership through legislation and regulations.

More than ever before, pets are thought of as family members. In fact, a 2015 Harris Poll found 95 percent of surveyed pet owners consider their pets to be members of the family. The term “pet parent” has become increasingly popular, alongside “dog mom,” “cat dad” and “pet guardian.” There’s even a National Pet Parents Day, which is celebrated on the last Sunday in April.

As the bonds between pets and their people evolve, so does the food provided for those companions. The pet food industry has come a long way since James Spratt introduced the first commercially prepared dog biscuit in England around 1860 and in the United States in 1870. The industry is actually quite young, given that dogs and cats have been used as working and companion animals for millennia.

The pet food industry has also become scientific in its approach to formulating diets for dogs and cats. In 1955, the National Research Council (NRC) of the National Academies of Sciences, Engineering and Medicine published its first Nutrient Requirements of Dogs report. The report summarized the latest research information on dog nutrition, including dogs’ requirements for energy (calories), protein, fat, carbohydrates, vitamins and minerals. Nutrient Requirements of Dogs has been updated four times since then, with the most recent edition published in 2006.

Nutrient requirements of cats were initially published by the NRC in 1972 as part of the report Nutrient Requirements of Laboratory Animals: Cat, Guinea Pig, Hamster, Monkey, Mouse, Rat. However, in 1978, cats received their own focused report, which was subsequently updated in 1986 and 2006.

The 1985 Nutrient Requirements of Dogs and the 1986 Nutrient Requirements of Cats were used by AAFCO’s canine and feline nutrition expert subcommittees as the bases for creating practical nutrient profiles for dog and cat foods using common pet food ingredients. Why? Because many of the NRC minimum nutrient requirements are based on research with purified diets and/or highly bioavailable nutrient sources that aren’t practical to use in commercial pet foods.

Today, pet food companies use the AAFCO nutrient profiles to guide their diet formulations. The practical application of knowledge gleaned from nutrition research has resulted in dog and cat foods that deliver optimal nutrition. And these improvements in nutrition have also contributed to longer life spans for our companion animals.

Not only are pet foods formulated to meet the nutritional needs of dogs and cats, but those diets are also designed to meet the requirements of different breeds, sizes, life stages and health conditions.

Yes, the relationships between pets and their people have come a long way since 1970. Pet nutrition and the pet food industry have also grown and evolved. At Diamond Pet Foods, we’re grateful for all of the pet owners who have chosen Diamond brand dog and cat foods to nourish their animal companions.

RELATED POST: Choosing a Pet Food: Should You Feed a Wet or Dry Formula?