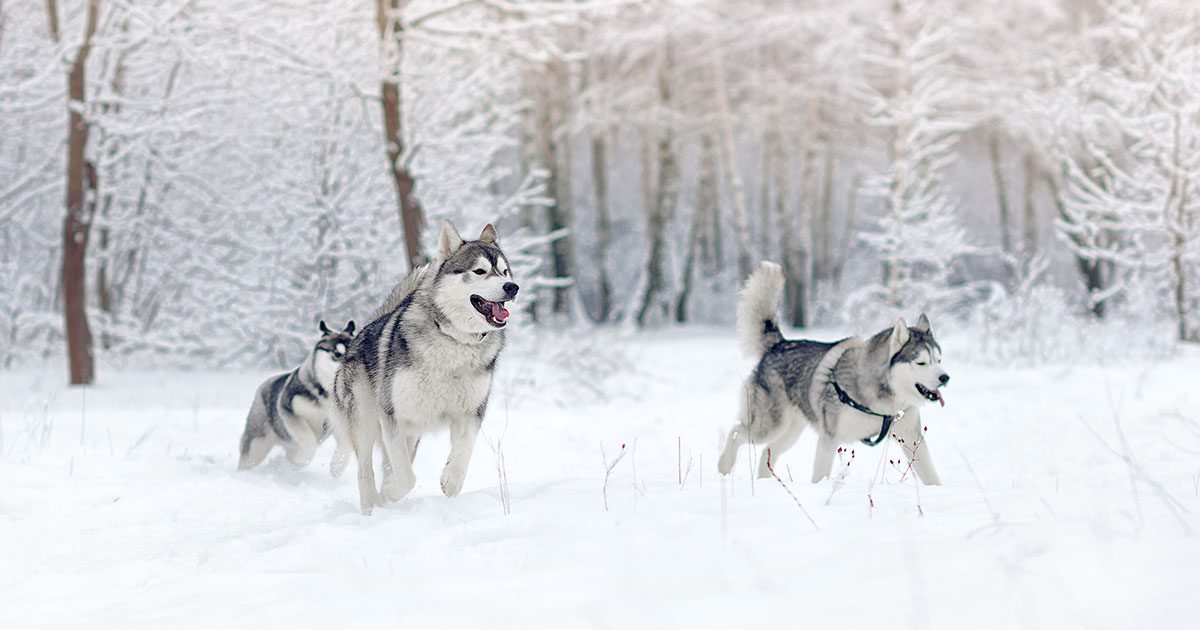 Ah, winter! For those who live in northern climates, winter means snow, cold, ice, wind, short days and long nights. While some of us may prefer to stay inside — maybe by a fireplace — others hit the ski slopes, zip across the ice or rev up the snowmobile. If you’re a fan of cold weather, hopefully your dog is too. Which got us wondering: What are some of the best cold-weather dog breeds?

Here are 10 breeds known for their ability to tolerate — and even love — the cold:

The Siberian husky is probably one of the first breeds that comes to mind when you think about cold-weather dog breeds. An ancient breed that originated in the harsh climate of Siberia, the husky is known for striking blue eyes, thick double coat, distinctive vocalizations and pulling sleds across the frozen tundra. Siberian huskies are also known for their high energy, smarts and independent nature.

Often mistaken for being part wolf, the Alaskan malamute is one of the world’s oldest breeds and one of the first developed in North America. The malamute is the largest of the traditional Arctic sled dogs with large snowshoe-type feet, thick pads and dense double coat. These dogs were bred to pull heavily loaded sleds, hunt seals and chase polar bears. Some malamutes still work as sled dogs today, while others compete in sled dog racing or go skijoring with their owners.

One of the world’s 14 oldest dog breeds, the Samoyed is named after the nomadic Samoyedic reindeer herders in Siberia. The dogs were used not only for herding but to pull sleds, hunt and protect their owners.

The Saint Bernard is a large (100- to 200-pound) working dog that originated in the western Alps between Switzerland and Italy. The Saint Bernard is most commonly recognized as a search-and-rescue dog breed, famous for finding people buried under snow after avalanches. These dogs, however, have also been used as draft dogs, guard dogs and cold-weather hunting dogs.

These friendly, large dogs are named after the Canadian island where they originated. Originally, the “Newfie” was used for hauling heavy, wet fishing nets and equipment along Canada’s east coast. A cousin of the Saint Bernard, the Newfoundland is known as a superior water dog with large, webbed feet that enhance the dog’s swimming ability. A dense coat protects the giant, shaggy Newfie from below-zero temperatures.

This ancient breed originated in the Himalayan Mountains to protect and guard sheep flocks from wolves, leopards, bears and tigers. DNA studies have shown that the Tibetan mastiff — which technically isn’t a “mastiff” by breed — genetically descended from the wolf more than 58,000 years ago, compared to other common dog breeds that descended from wolves 42,000 years ago. The Tibetan mastiff’s coarse double coat keeps the dog insulated and comfortable in both cold and warm temperatures. These dogs are known for being independent, strong willed, intelligent and tenacious.

These large, regal and protective dogs were originally bred to protect livestock and homes against bears and wolves in the Pyrenees Mountains between France and Spain. These gentle, but powerful, dogs have thick, heavy coats that protect them from winter’s harsh cold. Great Pyrenees are also known for being affectionate with kids of all ages as well as adults.

The kuvasz, which is Turkish for “armed guard of nobility,” is one of three ancient Hungarian breeds. These dogs were originally bred to serve as guard dogs and hunting dogs, but they eventually became guardians of sheep flocks. The kuvasz has a white double coat for protetion against the cold. A smart, independent and strong-willed dog, the kuvasz is a working dog who is serious about protecting their family. While they make excellent watchdogs and guardians, the kuvasz is not much of a playmate for kids.

This breed was bred to tolerate the cold, snowy climate and mountainous terrain of Tibet where they were originally used for herding sheep and retrieving items from mountainsides. Tibetan terriers have snowshoe-like paws that provide traction in heavy snow and a protective double coat. They’re agile and love to climb, making these dogs excellent hiking companions.

Contrary to the name, the Norwegian elkhound isn’t a hound at all. The breed has been used in Scandinavia since ancient times to guard homes and for hunting moose and bear. They’re very adaptable dogs; their love of snow and thick double coat make them excellent companions for outdoor winter activities.

Although these breeds were bred to tolerate some seriously cold winter weather, it can sometimes be too cold for even these dogs to spend long periods of time outside. If you have any questions about caring for and feeding your dog during the cold, snowy months, be sure to talk with your veterinarian.