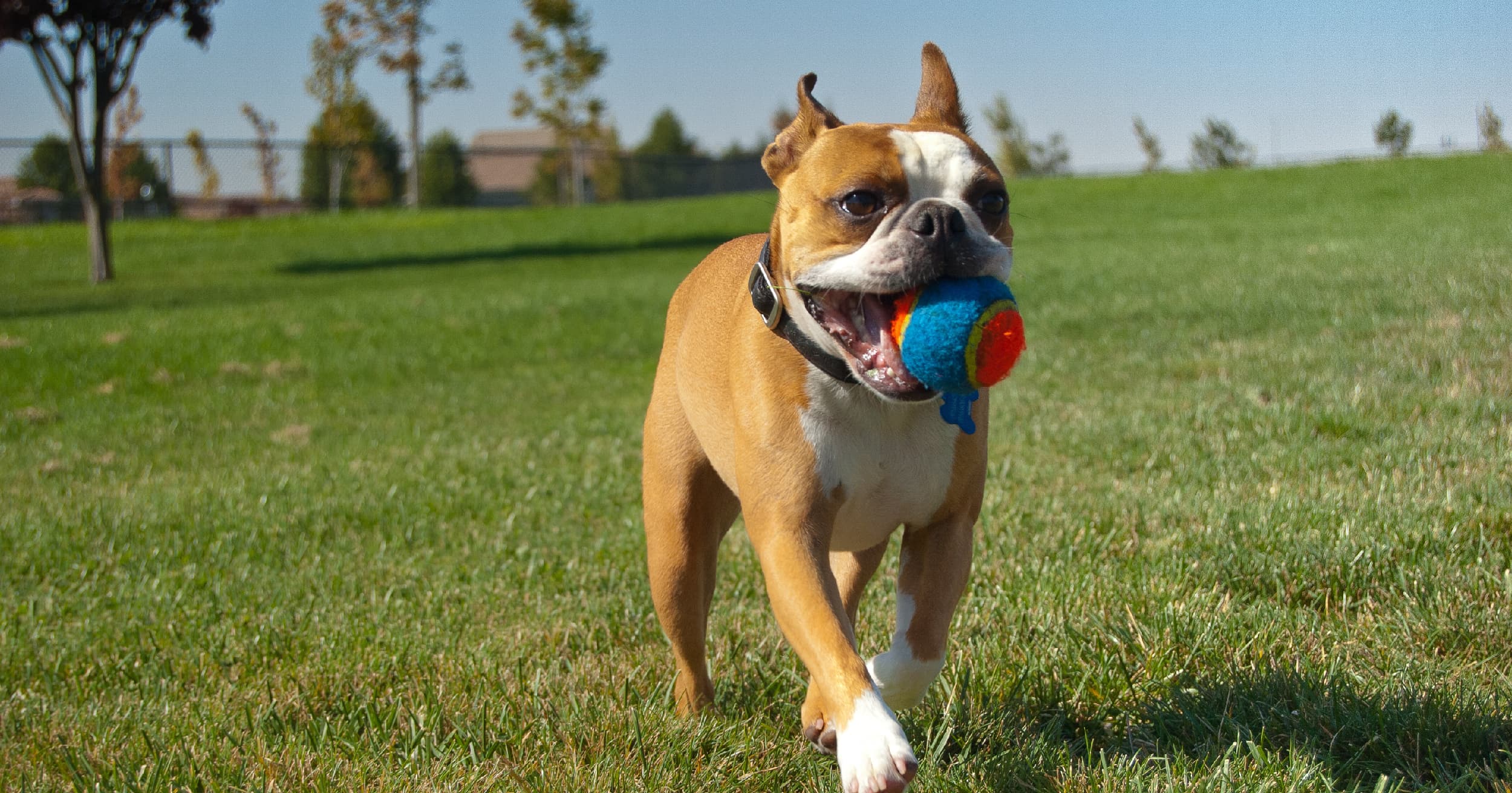 Some dogs are born with the instinct to fetch and will bring back anything you throw (without being asked). It’s even in the name of some breeds — Labrador retriever. But then there are other dogs who look at you with that characteristic head tilt and seem to be asking “Why did you throw my toy?” Whether your dog hasn’t yet learned what fetch is all about, or they’re ready for Advanced Fetch 3001, we’ve got some tips to get you started.

The first step in starting a game of fetch is making sure the area you’re playing in is safe for your dog. If you’re inside, play on carpeting or another traction-providing surface so your dog doesn’t slip and slide their way to an ER visit. You should also remove anything fragile or dangerous in the area in case your dog is a little off-course and bumps into something accidentally. If you’re playing fetch outside, make sure your throwing direction isn’t close to a road, and avoid throwing the toy near any hazards (e.g., rose bush, sharp rocks). Once the area looks safe, fetch can begin!

This section is for dogs who are new to the idea of fetch. Even if your dog doesn’t instinctively want to fetch their toys, you can teach them the game. Start with a toy that they play with already. It could be a ball, a flying disc, a toy stick, really anything that they like to play with. If your dog is more “Show me the food” than “Where’s my ball?” you could try using a toy that has a pocket for food. That way their food motivation is encouraging them to chase after the toy. You may also have to try different toys, because their favorite chew toy may not be their favorite fetch toy.

Get their attention on the toy, throw it a small distance from you and encourage them to go get it. Use “fetch” often (or another word) so they associate chasing the toy with that word. You may have to start by chasing after the toy yourself if they just stare blankly at you. Once they grab the toy, reward them with lots of praise and/or treats (whatever you would like to use as a reward). Repeat this until they understand they’re meant to chase the toy, and gradually increase the distance you throw the toy.

Next you want them to bring the toy back to you. Once they have the toy, call them excitedly back to you. You can reward them for coming back to you when asked (even if they don’t bring the toy), but they should get extra praise and rewards when they bring the toy with them. The next step is getting them to drop the toy. Obviously, this is easy if they know “drop” already. If not, say “drop,” pause slightly and then show them a high-value treat. When they drop the toy give them the treats and lots of praise. If they aren’t food motivated, you can also use a second toy to entice them to “drop”; but it needs to be a high-value toy so they actually drop the first one.

Now you can put it all together. It might take some practicing, but eventually they should understand the fun of playing fetch!

If you want to increase the fetch difficulty level, you can try teaching your dog to fetch their toys by name. Not all dogs can learn this trick, but for those who do, it’s an impressive skill. Start with one of their favorite toys and give it a name that doesn’t sound similar to another name your dog is familiar with (e.g., don’t name the toy “Teddy” if your dog’s name is “Freddy”). Show the toy to your dog and ask them to get it by name. Give lots of praise/treats when they pick it up. Continue to play with it for a while, calling the toy by its name. Repeat the process with other toys and see if they can tell the difference when the named toys are next to each other.

Once they’re good at this, you can make it harder by putting named and unnamed toys together or asking your dog to fetch their toy when it’s out of sight (hide-and-seek fetch). A bonus of this skill is that with training, things like “Fetch the remote” could be possible for some dogs.

Fetching the remote is a pretty cool trick, but what if your dog could fetch something from the cabinet or the fridge? That would really impress your friends and family. To be able to do this, your dog needs to combine multiple skills, so this really is for expert-level fetchers — the valedictorians of fetch school.

The example we’re going to use is getting a beverage from the fridge, but you could use the same instructions to teach your dog to fetch something from a closet or cabinet. First, your dog needs to be able to open the door, so you’ll need to tie a rope or something similar to the fridge handle for them to pull on. It helps if it’s something they’re already used to playing with.

Next, show your dog the beverage you would like your dog to fetch from the fridge. Make sure the container is something your dog can’t break in its mouth or get hurt by. You may want to put the container in a bag or covering that’s still easy for your dog to grab but then you don’t have to wipe off the, uh, slobber, before you drink from it. Teach them its name (see Intermediate Fetch above) and make sure they can fetch it like a normal toy. Now, prop open the fridge door and put the beverage in a place your dog can easily reach. Show them where it is and tell them to fetch it by name. You may need to start with the door wide open and gradually close it a little at a time. Eventually your dog may be able to use their nose to push the propped door open.

Learning to open the door is next. Shake the rope (or other opener) attached to the fridge handle until your dog wants to grab it and play with it, which will also open the door. Practice this until they know that pulling on the rope opens the door. Ideally, you want them to learn how to close the door, too. The easiest way is to have them jump on the door with their front paws.

Now it’s time to put it all together. The goal is that by saying “Fetch the Drink” (or whatever name you gave your drink), your dog realizes that it is in the fridge and they need to open and then close the fridge door and bring it to you. It goes without saying that this is a very hard trick that will take a lot of practice, praise and rewards to master. And since your dog will have access to the fridge, it might be a good idea to remove the “opener” after you’re done with the trick or use a fridge that doesn’t have tempting people food in it.

Fetch is a fun game for dogs to play, whether they’re fetching a scuffed-up tennis ball or showing off their fetch-it-from-the fridge skills. And it’s good exercise, too! 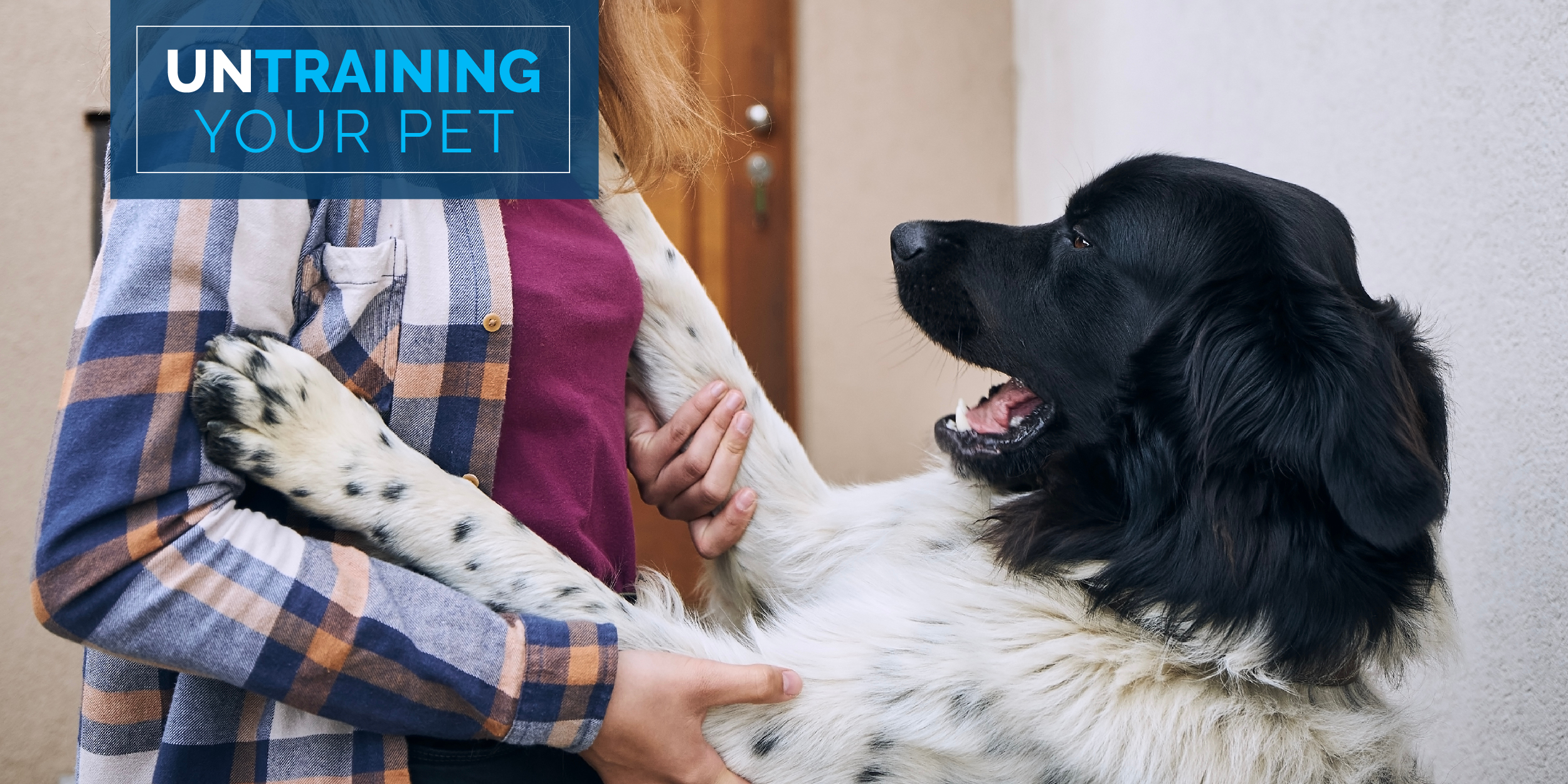 Untraining Your Pet: No More Jumping on People 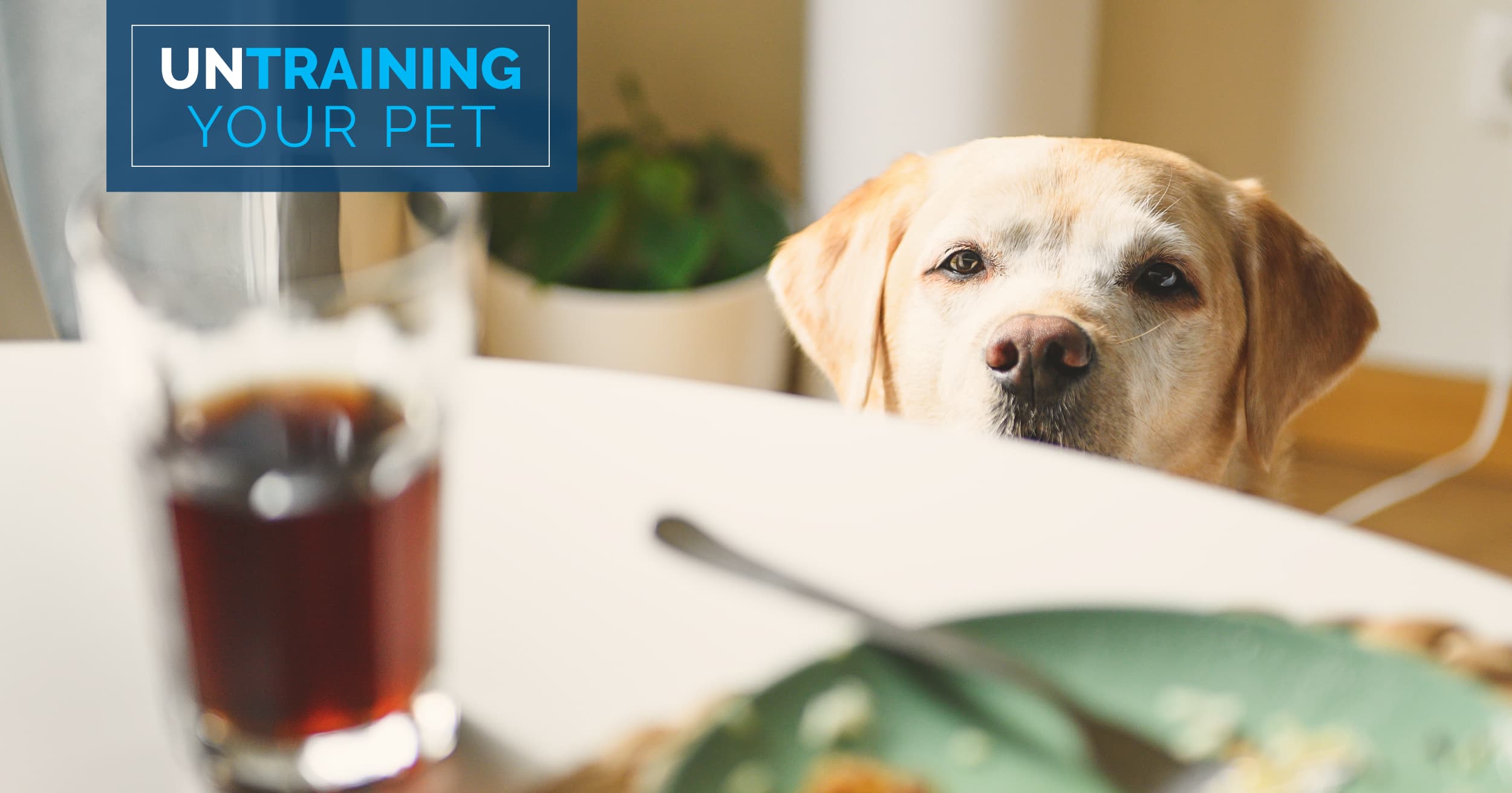 Untraining Your Pet: Stopping Your Dog from Begging 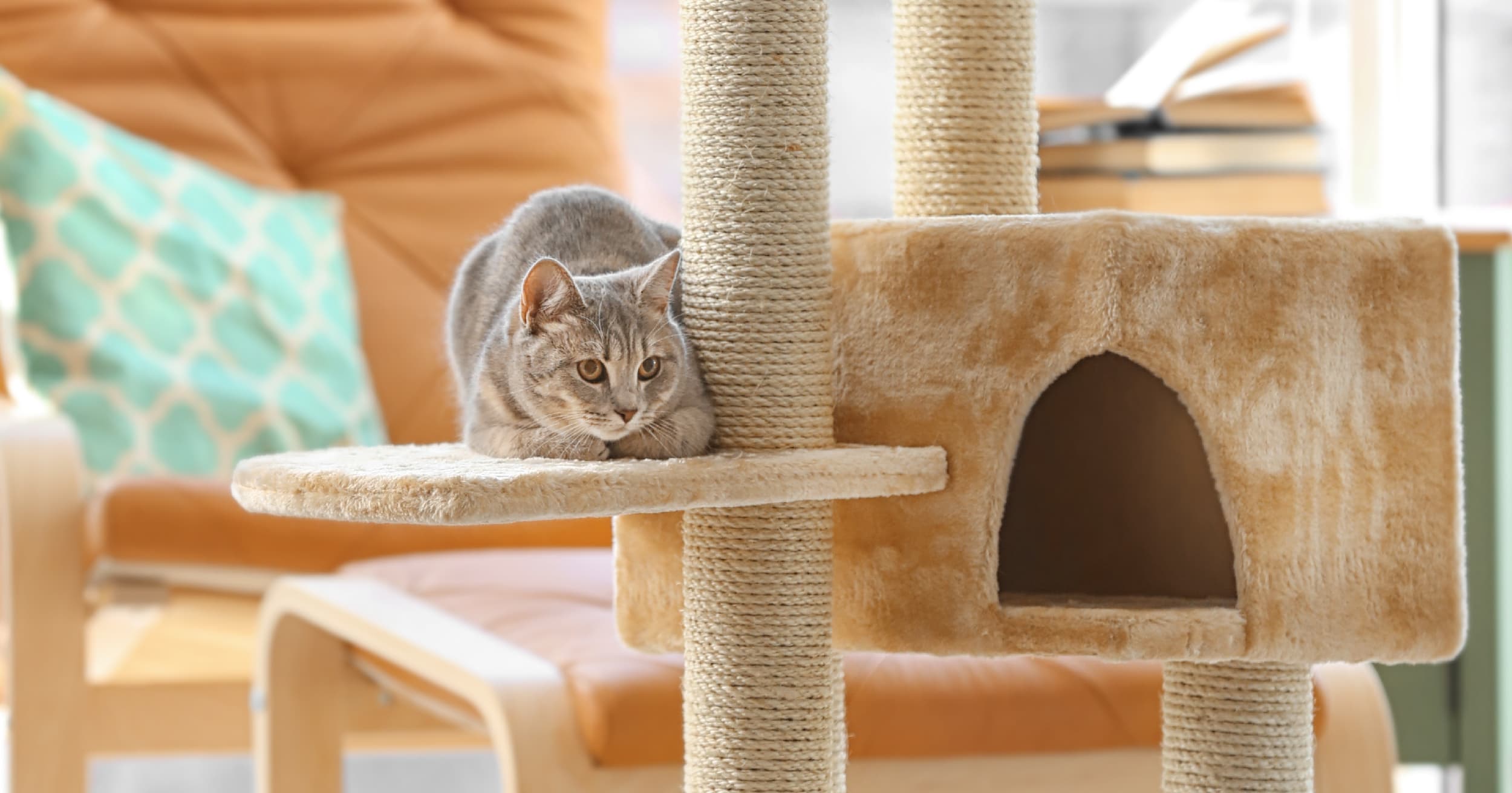