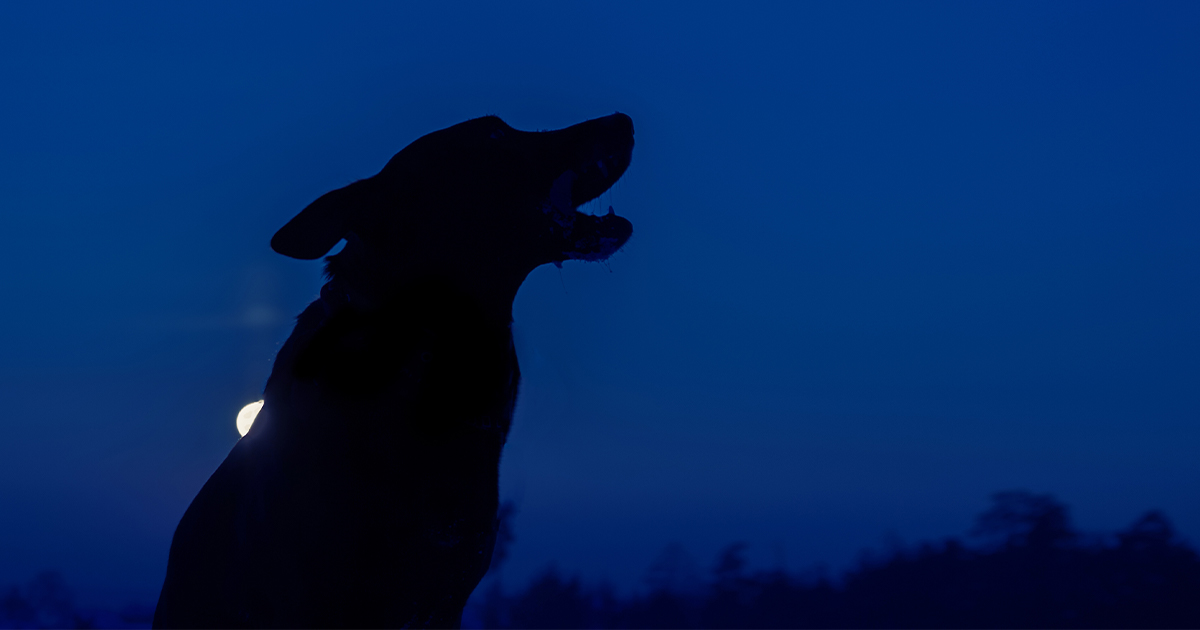 It’s a full moon. Your backyard is illuminated by the moonlight. The air is still and the night is quiet. In the distance you hear a dog howl. Then another. And another. Are they channeling their wolf ancestors and howling at the moon? Or is it just your imagination?

Nope, those dogs in our story weren’t howling at the moon. And the only wolf behavior they were channeling was how to howl because wolves don’t howl at the moon, either. So where did this myth originate, and why do dogs howl?

Many Moons Ago…
Let’s start with where the “dogs howl at the moon” myth probably came from — the legend that wolves howl at the moon. The association between wolves and the moon has been around for eons, possibly originating from ancient cultures. It may look like wolves are howling at the moon because they are nocturnal, so they’re more likely to howl at night, and when they howl, they point their noses toward the sky so that the sound projects farther. However, there is no relationship between when wolves (or dogs) howl and the phases of the moon.

It’s Not the Moon, So Why the Howl?

Wolves howl to communicate with other wolves, particularly over long distances. For example, howling is used to help reunite wolves that have been separated from the pack. Dogs, on the other hand, howl to attract attention, acknowledge other dogs and respond to high-pitched sounds (e.g., sirens and musical instruments). Dogs may also howl due to fear, anxiety, illness or just because they’re excited to see you. Some breeds, like Siberian huskies and Alaskan malamutes, are more likely to howl than other breeds, and some dogs are more likely to howl than other dogs.

Why Do We Think the Moon Myth Is True?

Dogs howl any time of the day or night, but nighttime is generally quieter, which means the sound travels farther. So people may not notice the dog from across town howling during the day like they do at night. As for the full moon, perhaps people look outside more when the night is bright so they tend to notice things (like a dog howling) a little more.

The moon affects life on Earth in many different ways, but making dogs howl — that’s not one of them.